We in the Chugai Group extend our sincere condolences to all the victims of the earthquake that struck eastern Japan on March 11, 2011. We hope for the earliest possible recovery of the affected area.
Immediately after the earthquake, the Chugai Group set up an emergency headquarters led by the CEO of Chugai, to confirm the safety of employees and the extent of damage. The headquarters also took action to ensure business continuity and support the recovery and reconstruction of the disaster area.

Immediately after the earthquake, based on the earthquake business continuity plan, the Chugai Group set up an emergency headquarters led by the CEO (the Deputy Chairman of the Board served in his place on March 11) to quickly establish an information gathering network. Under his direction, the headquarters confirmed the safety of employees and verified the extent of damage.

Extent of Damage to the Chugai Group

Support for the Disaster Area 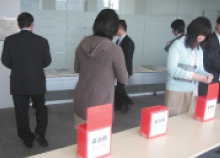 Fundraising at the
Head Office

With signs of influenza infection reported at evacuation centers, Chugai donated approximately 60,000 treatment courses of stockpiled(*1) anti-influenza agent Tamiflu® Capsule 75 (oseltamivir phosphate) in light of the urgent need for medical supplies. The donations were provided mainly to the prefectures affected by the disaster.

(*1) Local governments had stockpiled Tamiflu® for use against the influenza A/H1N1 pandemic. Chugai agreed to the use of these stockpiles for prevention and treatment of infection among victims of the disaster.

Support for Psychological Care for Children

The Chugai Group participated in the Roche 2011 Children’s Walk, a global charity event sponsored by Roche to assist children in need. From the total amount raised by Chugai Group employees plus matching donations from Chugai, approximately ¥4.3 million was donated to Ashinaga Ikuei Kai(*2) for the construction of Tohoku Rainbow House, a facility for providing psychological and other support to orphans of the Great East Japan Earthquake.

(*2) A Japanese non-profit organization that provides support in the form of scholarships and ongoing psychological care to children in and outside Japan who have been orphaned for various reasons. Ashinaga Ikuei Kai built Kobe Rainbow House in 1999 to provide psychological care for orphans of the Great Hanshin Earthquake.

The Chugai Group donated 100 copies of a children’s science picture book for a project by the Japan Committee for UNICEF. The aim of the project is to deliver picture books and smiles to children living in evacuation centers.

Chugai agrees with the purpose of the IPPO IPPO NIPPON Project, launched by Keizai Doyukai (Japan Association of Corporate Executives) branches nationwide to provide medium- to long-term support for reconstruction in areas devastated by the Great East Japan Earthquake, and in 2012 became a project supporter. The project is a platform for ensuring the reliable and timely allocation of donations from companies and individuals in cooperation with Keizai Doyukai branches in the affected areas. By listening to the needs of those affected by the disaster, and through careful review of aid projects each term, it works to develop human resources and revitalize industry in the disaster-affected region. Support primarily emphasizes children and youth who represent the future, and includes providing practice equipment for vocational high schools affected by the disaster, support for reconstruction projects by national universities, and donations to funds aiding children orphaned by the earthquake. 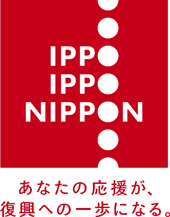 Following a similar event held in February, on December 10 and 11, 2013, the Chugai Group held a sales campaign at its head office to support recovery efforts. For the latest event, co-sponsor Mitsui Fudosan Co., Ltd. provided the use of space on the building premises, which allowed us to open the event to other tenants in the building, as opposed to the previous event, which was strictly internal. The event thus drew support from an even larger number of people than before.
Participating in the event were representatives of the Kesennuma Product Promotion Association and the Wa Wa Project, who offered products for sale that would support the disaster-affected regions, including baked goods and other foods, sundries, and seafood and other specialties from Kesennuma. The event once again conveyed how a great many people hoped to support the Tohoku region, as visitors interacted with staff and asked them about conditions in the affected areas.
Approximately 800 people visited the sale event, with the campaign generating a total of about ¥500,000 in sales, all of which will go back to the producers of the goods sold. Continuing to hold this event is one way Chugai hopes to maintain its support for recovery of the disaster-affected regions.

Procurement and sale of products for this sales campaign were made possible with the cooperation of the Wa Wa Project (http://wawa.or.jp/en/), a Great East Japan Earthquake support platform; the Kesennuma Product Promotion Association (https://k-bussankyo.jimdo.com/); and the Rias Tourism Creation Platform. 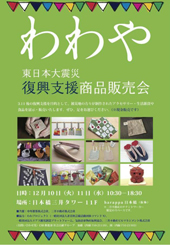 Support for the WA WA Project

The WA WA Project(*3) is a platform for supporting those involved in creative expression, launched by command N, a non-profit, artist-run organization established to bring together and assist those who are active in the regions affected by the Great East Japan Earthquake, and people who support them. Their activities include publication of the WA WA Newspaper, which offers information about a variety of creative projects, communication via a website, and exhibitions held both in Japan and overseas.

The WA WA Newspaper, in particular, is an important print source of information for people living in temporary housing in areas affected by the disaster. Chugai has supported publication of the WA WA Newspaper since April 2012. As part of its support for areas affected by the Great East Japan Earthquake, the Chugai Group also worked with the WA WA Project in December 2012 to hold a charity sale at its business sites which featured household and other items created by individuals in the affected regions.

(*3) The “Wa-Wa” project name comes from the multiple meanings of the word wa in Japanese, which include “circle,” “unity” and “togetherness.” In the Tohoku dialect, wa also means “me,” so the name “WA WA” also incorporates the hope of creating bonds between individuals.

Chugai’s program to donate specially equipped welfare vehicles began in 1985 as part of activities to commemorate the Company’s 60th anniversary. In March 2015, Chugai commemorated its 90th anniversary by donating a total of 30 k-type welfare vehicles, which are needed as second cars, to welfare organizations in six prefectures in the Tohoku region, mainly those affected by the Great East Japan Earthquake.

Chugai Receives Letter of Appreciation from the Minister of Health, Labour and Welfare

On March 11, 2013, Chugai received a letter of appreciation from the Minister of Health, Labour and Welfare for its program to donate specially equipped para-transit vehicles, part of Chugai’s social contribution programs, as an activity supporting the victims of the Great East Japan Earthquake.

This donation was started as part of Chugai’s 60th anniversary program in 1985, donating vehicles to be used for transportation of elderly persons and physically disabled individuals who receive long-term nursing care at home. Recipients have been selected from all prefectures in Japan, in cooperation with the Japan National Council of Social Welfare and Central Community Chest of Japan.

This letter of appreciation was given to Chugai for its donation of specially equipped para-transit vehicles to the following six organizations in 2011 and 2012, those selected by taking into account the high needs in the prefectures affected by the earthquake.

As part of its social contribution efforts, the CHUGAI Wellnet Club(*4) planned and carried out a volunteer program to assist in the recovery of the area affected by the Great East Japan Earthquake. This program provides ongoing support for the long-term efforts to rebuild the aquaculture industry of the Karakuwa Fisheries Cooperative in Kesennuma City, Miyagi Prefecture. The first event took place over three days from November 10, 2011, with 38 people participating.

(*4) CHUGAI Wellnet Club was established for the purpose of improving the welfare of Chugai Group employees and operates various programs together with the employee labor union.

In June, Chugai collected donations for and participated in the global charity event Roche Children’s Walk 2014.

Approximately 2,900 Chugai employees helped raise funds, which resulted in donations totaling ¥1,574,000. These funds were matched by the Company with a gift in the same amount, for a total of ¥3,148,000. Half of the funds were donated through Roche to assist orphaned children in Malawi. The remaining half was donated to Exchange Salon Hikari, which is operated by the nonprofit organization Fuyodo 2100 to provide support for disabled children as well as their families who are evacuees from the Great East Japan Earthquake. At the donation presentation ceremony held in July at Exchange Salon Hikari, children offered letters of thanks, along with hand-written posters and origami peacocks.

In June, Chugai collected donations for and participated in the global charity event Roche Children’s Walk 2015 implemented by the Roche Group.

2,878 Chugai employees helped raise funds, which resulted in donations totaling ¥1,375,000. These funds were matched by the Company with a matching gift in the same amount, for a total of ¥2,750,000. Half of that amount was donated through Roche to assist orphaned children in Malawi. The remaining half was donated at the recommendation of the Association for Aid and Relief, Japan, an NPO, to Network Orange, an NPO in Miyagi Prefecture (Miko Onodera, Representative).

Funds Raised in Roche Children’s Walk 2016 Donated to Hakku no Ie (Huck’s House), a Facility that Supports People with Disabilities in Iwate Prefecture

The Roche Children’s Walk is a global charity event sponsored by the Roche Group. Funds raised by 2,558 employees in FY 2016 totaled ¥1,186,338 and were donated to Huck’s House (Atsuko Takeshita, Administrator), an NPO in Iwate Prefecture. Huck’s House saw some of its aging playground equipment removed. We received a message from Ms. Takeshita, the facility’s administrator, saying that she would see that funds donated would be carefully used to provide the children with a better-equipped playground. 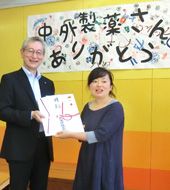 Funds raised in Roche Children’s Walk 2018 donated to a facility in Iwaki, Fukushima Prefecture that supports children and adults with disabilities

A total of ¥1,190,000 in funds raised by 2,456 Chugai employees in the Roche Children’s Walk 2018 were donated. The Company matched these funds with a gift in the same amount, with half that amount donated through Roche to assist orphaned children in Malawi. The remaining half was presented to Chobora, a non-profit organization in Iwaki, Fukushima Prefecture.
Chobora was preparing to open its “Po’okela House,” a short-stay facility for individuals with severe disabilities, but was struggling to raise the necessary funds. The Company’s donation will go to the cost of installing a sprinkler system in the facility and other expenses.
The donation presentation ceremony held on August 24 was attended by Atsushi Sato, general manager of the CSR Department (name and title as of 2018), who presented a commemorative certificate to Miyuki Hiwada, executive director of the organization.
Ms. Hiwada, in turn, presented a certificate of thanks, and expressed her gratitude to everyone at the Chugai Group for their warm support. 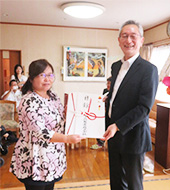