A conventional IgG antibody has two antigen binding sites that bind to the same antigen. In contrast, a bispecific antibody (BiAb) has two different binding sites consisting of two different heavy chains and two different light chains, which can respectively bind to two different antigens. Due to various issues regarding the manufacturability of BiAb, no recombinant immunoglobulin G (IgG) BiAbs have been approved yet. However, Chugai’s antibody engineering technologies have enabled large scale manufacturing of BiAbs, resulting in the generation of a BiAb expected to treat hemophilia A.

With many years of experience and expertise in the field of hematology, including research into erythropoiesis stimulating agent (ESA) and granulocyte colony stimulating factor (G-CSF), Chugai felt a sense of mission in dealing with hemophilia, an area of high unmet medical needs. Hemophilia A results from an inherited deficiency or a functional abnormality in clotting factor VIII (FVIII) that causes bleeding disorder. Replacement therapy with concentrates of FVIII is the most common treatment, but problems with the therapy include the need for frequent intravenous injections (three times a week) and the creation of antibodies that neutralize FVIII activity. To deal with these issues, Chugai began development of emicizumab (phase I/II clinical trials currently under way in Japan), a BiAb that mimics the cofactor function of FVIII by binding to factor IX (FIX) and factor X (FX). Large-scale manufacturing of BiAbs results in many different antibody species, making the manufacturing of highly pure target BiAb nearly impossible. Chugai overcame this problem with a proprietary technology called ART-Ig®, ART-Ig® incorporates three antibody engineering technologies: 1) introduction of a common light chain to reduce the number of combinations of light and heavy chains; 2) introduction of difference in the charges of two heavy chains to facilitate purification of the target BiAb; and 3) use of electrostatic steering of the two heavy chains to facilitate expression of the target BiAb. The application of these three technologies resulted in a process capable of producing a target BiAb on a 2,500-liter scale with productivity and purity similar to conventional antibodies.

The establishment of ART-Ig® technology has enabled the use of IgG BiAbs as a practical method for drug discovery. As such, it is expected to lead to the generation of drugs with a new mode of action that enhances efficacy by simultaneously binding with two types of antigen or provides new pharmacology by bridging two antigens.

Evaluation of Procoagulant Activity of Emicizumab in Hemophilia A Plasma 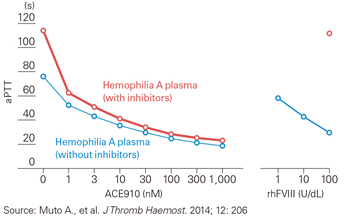